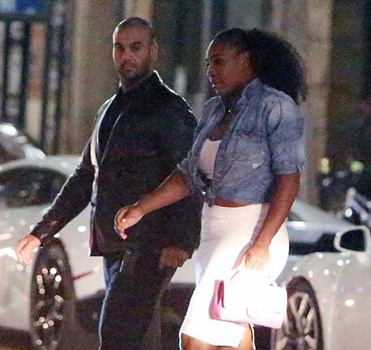 Drake was on hand to see her showcase her new clothing collection at New York Fashion Week last week.

Serena Williams appeared to be returning the favour in style as she turned up to the grand opening of his new eatery Fring's in Toronto on Monday.

The tennis pro, who is known for her amazingly athletic build, squeezed her muscular curves into a skintight white pencil skirt and a matching crop top beneath a tied denim blouse.

Serena traded her trainers for a pair of metallic blue and purple pumps with spike heels that she had no trouble walking in.

The 5 ft 9 athlete clutched a pale pink bag as she crossed a street with a male companion.

Drake was in great spirits at the unveiling of his new restaurant with celebrated chef Susur Lee, who owns multiple culinary establishments in Toronto and other cities.

Serena Williams and Drake have been making quite the buzz. It seems as though they rekindled their romance, Drake made an appearance at Serena's fashion launch and now Serena is returning the kind gesture by attending the opening of his restaurant, Fring's.

The tennis star wore a white bandage skirt and crop top with a denim shirt to finish it off. She accesorized her look with a pink Chanel quilted bag that matched her purpler/pink and blue ombre pumps.

After some investigating, we found the makers of these pumps are none other than the famous, Christian Louboutin.

Her So Kate pumps are sold out but you can click over to MatchesFashion.com to get the red and black ombre in Pigalles.

Don't want to put a hole in your wallet? No worries, we've got some unique metallic finds in the edit below!