Tennis Australia Apologizes For Putting Tomic In 'Hall Of Shame' 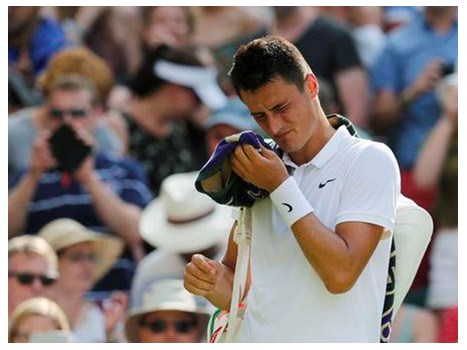 Tennis Australia has apologized for a 'clerical error' in a media release that said estranged local player Bernard Tomic was playing in a 'Hall of Shame' event against compatriot John-Patrick Smith.

The media release said Tomic, who was dumped from Australia's Davis Cup team after a rant against officials, was playing Smith in the 'Hall of Shame Tennis Championships', causing a stir on social media networks.

"Tennis Australia sincerely apologizes for the typo in the daily results service today," the governing body said in a statement.

"This has now been corrected and we wish both Bernard Tomic and JP Smith all the best in the Hall of Fame Championships in Newport," TA said in a statement.

"This unfortunate error has been widely circulated on social media and there is some discussion as to how such a mistake could occur.

"We have a very upset staff member who made a simple clerical error.

"There was no malicious intent."

TA's relationship with Australia's top-ranked player Tomic has long been frosty but it reached a new low at Wimbledon where the world number 26 accused officials of lacking respect for him and failing to support him and his sister Sara, who plays mostly lower-tier ITF events.

Tomic's father John said the family was considering legal actions and claimed his son had been threatened by TA.

"Bernard has already been punished by his non-selection for the upcoming Davis Cup tie," Tomic senior told Fairfax Media in a statement, which was published by the Sydney Morning Herald.

"Bernard accepted his sanction in a professional manner and was willing to move on. It seems TA have commenced living up to their threat.

"How typically childish and arrogant of TA to permit publication of such material and then expect to get away with it. We have no alternative but to refer the matter to our legal people for advice."

Australia are due to play a Davis Cup quarter-final against Kazakhstan this week but the leadup has been plagued by in-fighting and further controversy surrounding hot-headed talent Nick Kyrgios.

World number 29 Kyrgios bowed out of Wimbledon in a hail of criticism for his on-court histrionics, with accusations of poor sportsmanship throughout the tournament and 'tanking', or not trying, during his fourth-round match against Frenchman Richard Gasquet.

Rafter added fuel to the fire over the weekend by telling a local newspaper that TA was focusing on developing players the country could be 'proud of'. He also suggested the rift between TA and Tomic might never heal.

The 20-year-old Kyrgios, who has defended Tomic and is expected to play Davis Cup this weekend, returned serve on Twitter.

"Another negative comment out of Rafters mouth. Does this guy ever stop #everyoneisaworkinprogress," he tweeted in a post that was later deleted.