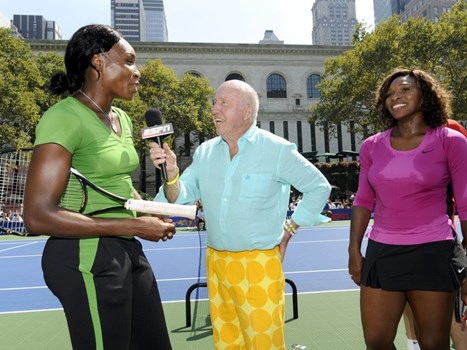 With his colorful style in both commentary and fashion, tennis writer and broadcaster Bud Collins livened up the tennis world for nearly 50 years. He died at his home in Brookline, Mass., at age 86.

His death was announced by his wife, Anita Ruthling Klaussen, on her Facebook page.

Collins, a longtime columnist for The Boston Globe and an analyst for CBS, NBC, ESPN and the Tennis Channel, was best known not only for his commentary during NBC's Breakfast at Wimbledon broadcast live on weekend mornings but also for his lively pants and bow ties, sometimes yellow, sometimes purple, always vibrant.

In his remembrance of Collins, NPR's Only A Game host Bill Littlefield wrote:

"He was almost as well-known for his sartorial splendor — more specifically for the gaudy pants that became a kind of trademark. In our conversation during the 2002 French Open, I mentioned to Bud that one of the players, Jeff Grant, had noted Bud's trousers.

" 'I think he had some kind of green and pink pastel with some flowers,' Grant told me. 'Vintage Bud.'

"I asked Bud for comment, and he responded, 'I can categorically state that I have been paid by no one to wear anything. And no one would pay me to wear anything, and most people are surprised when I even pay for those creations.' "

The pants were his "trademark and a symbol of the gusto he brought to his reporting," NPR's Tom Goldman reports.

"Collins wrote several tennis encyclopedia, and coached tennis at Brandeis University where one of his players was future activist Abbie Hoffman," Tom says. "But it was his years of tennis columns and commentary that defined his career."