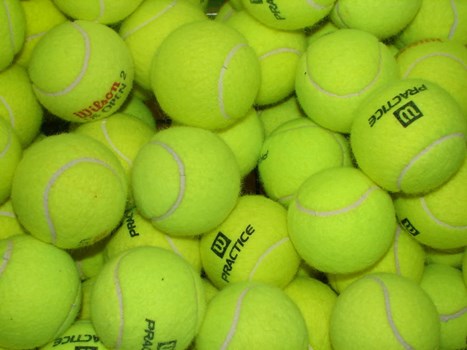 Tennis is a sport rich in history and tradition. Its origins date back to ancient Arabic sports. It became popular in France in the late 11th century as the sport of monks and nobility. The "Sport of Kings" was romanticized by English royalty, King Henry VII and Henry VIII. The tennis ball itself has its own rich history.

The first tennis balls were made of leather that wrapped wool or fur around the ball with string. They date as far back as the early 11th century with no one credited for the invention. Because of the sport's popularity and use by nobility, the making of real and lawn tennis balls were done primarily by Scottish craftsmen until the sport became globalized in the 19th century.

Charles Goodyear, famous for his use of rubber tires and other industrialized products, created the first rubber tennis ball with felt stitched along the outside. This was developed as the rubber vulcanization process became popular in the 1870s. The balls were designed for lawn tennis---tennis on an outside grass surface similar to today's Wimbledon and common at the time in England. Walter C. Wingfield standardized the rules for lawn tennis, and Alexander Cartwright was primarily responsible for popularizing it.

While original balls were rubber throughout the core, it was discovered that playability could improve by making the inside of the ball hollow. Modern balls utilize rubber and a complex chemical composition and are manufactured in Southeast Asia.

Pressureless tennis balls are designed to take more wear and tear without losing their bounce. While they do not bounce as high, they are livelier than pressurized modern balls the more they are used. They are a new phenomenon popularized by companies like Trenton and Penn.

Tennis balls were originally white and sometimes black in color. Their color was determined by the color of the court to provide best the visual tracking of the ball. In 1972, the International Tennis Federation changed the standard color to yellow not because players could better track the balls, but because television spectators would have an easier time doing so.

Tennis balls follow strict guidelines in creation and game rotation in order to provide players with the optimal circumstances for performance. While the standard has been set and accepted, "real tennis," that original sport played by the nobility in England and France in a room, still uses hand-stitched balls that give this sport a continued sense of nobility and history.