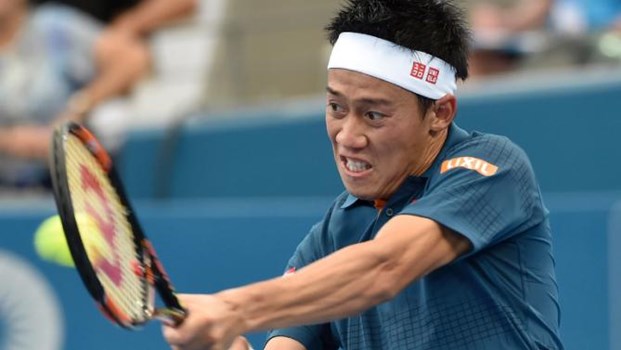 “I have been impressed at how he has continued to evolve as a player,” Fast Retailing Chairman Tadashi Yanai said in a statement about the contract Friday. The deal may exceed $10 million a year, according to a person familiar with the agreement.

The 26-year-old Japanese made history in the 2014 U.S. Open by becoming the first Asia-born man to reach the finals of a Grand Slam tournament. Nishikori’s success vaulted him to fame and helped him win endorsements from the likes of Jaguar, TAG Heuer and Japanese construction materials maker Lixil Group Corp., a sponsor of the 2020 Olympic Games in Tokyo.

Olivier van Lindonk, Nishikori’s agent, declined to comment on the terms of the agreement with Uniqlo, which initially named Nishikori a “global brand ambassador” in 2011. Van Lindonk said the Olympic Games bode well for his client, the youngest player currently ranked in the top 10.

“Companies are looking for the next generation of champions,” said van Lindonk, vice president of tennis at talent-management agency IMG . “With Tokyo 2020 only four years away, this created an interesting dynamic with the clothing companies looking for an Asian star.”

Nishikori, ranked No. 8 after rising as high as No. 4 last year, was upset Friday by Australia’s Bernard Tomic in the Brisbane International quarterfinal.

Yanai has said he expects growth to come from outside Japan as the casual clothing brand opens flagship Uniqlo stores in cities including Paris, New York and Shanghai, among 414 stores in China, its biggest overseas market.

“Celebrity endorsers help to raise the profile of Uniqlo abroad,” said Thomas Jastrzab, Bloomberg Intelligence consumer analyst. “This will become more important as Fast Retailing further ramps up expansion in countries where Uniqlo is less well-known than rivals such as H&M and Zara.”