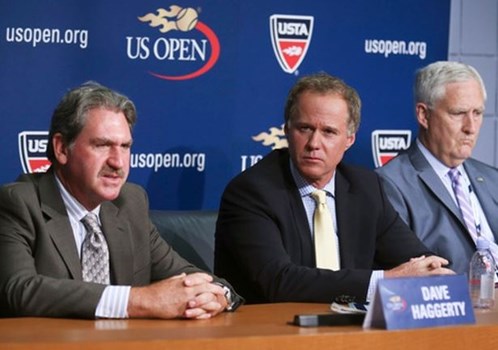 David Haggerty, a recent president of the United States Tennis Association and a longtime tennis industry executive, was elected president of the International Tennis Federation on Friday in a close vote in Santiago, Chile.

“My head is spinning,” Haggerty said in a telephone interview from Santiago. “I think the results and the vote count sends a message that the nations want some changes, and I understand that.”

One of the top priorities will be examining the format of the I.T.F.’s primary property, the Davis Cup men’s team competition, in the interest of increasing revenue and global interest.

Haggerty said he favored a Final Four format for both the Davis Cup and the Fed Cup, the leading women’s team competition.

“I can’t say that’s what we’re going to do, but I can certainly say it’s something that’s got some favorable feedback and traction from some of the nations,” Haggerty said. “It’s more likely they’d be in different cities because of the timing today, but if you look at it, the Davis Cup and Fed Cup Final Fours could be in the same city, with one held one week and the other the week after.”

Haggerty also will push for an expansion of the Fed Cup’s top division from eight teams to 16. A fan of the N.C.A.A. basketball tournament, Haggerty said the Final Four concept would preserve the Davis Cup’s traditional home-and-away format in the early rounds, with the four semifinalists then coming together in a host city chosen well in advance.

“That would make it easier for television, easier for fans to follow the format,” Haggerty said.

Such a change, which would be one of the biggest in the Davis Cup’s 115-year history, could meet considerable resistance in places where passion for the event remains strongest, such as France and Argentina. Any format change to the Davis Cup or the Fed Cup would need approval from the I.T.F. general membership, which did vote for another significant change on Friday, approving the introduction of a fifth-set tiebreaker in Davis Cup matches, beginning in 2016.

A tennis Final Four potentially could be staged over a single week, and it would be easier to do if matches were best-of-three sets instead of the current best-of-five. That could mean the Davis Cup would occupy three weeks on the annual calendar instead of the existing four — a significant bargaining chip with the men’s tour in the never-ending haggling over scheduling.

Haggerty was elected to a four-year term on the second ballot at the I.T.F.’s annual general meeting, receiving 200 votes. Anil Khanna, president of the All India Tennis Association, received 192 votes.

Europe is the traditional I.T.F. stronghold, but the two European candidates — Rene Stammbach, the president of the Swiss Tennis Association and Juan Margets, a Spaniard who is executive vice president of the I.T.F. — split European support and were eliminated on the first ballot. Khanna led in the first round with 151 votes, followed by Haggerty with 120, Stammbach with 62 and Margets with 59.

Haggerty is the fourth American president of the I.T.F., but the first since Walter Elcock, who served from 1974 to 1975.

Haggerty is the only American to head an Olympic international federation in a summer or winter sport. He said he had received support from the United States Olympic Committee during his campaign.

A resident of Pennington, N.J., Haggerty plans to move to the London area, where the I.T.F. is based.

A former college player who attended George Washington University on a tennis scholarship, Haggerty later was chairman of Head U.S.A. after working as a senior executive at Prince and Dunlop.

A consensus builder by instinct, he also has a proactive streak. He addressed several longstanding problems during his term as U.S.T.A. president in 2013 and 2014 — approving a major prize money increase at the United States Open, ending the Super Saturday schedule to give the men’s players a day of rest between the semifinals and final, and approving construction of the long-debated roof over Arthur Ashe Stadium.

The U.S.T.A. also announced plans during his tenure for a large training and developmental complex in Orlando, Fla., that is now under construction and will, among other purposes, serve as the hub for elite player development.