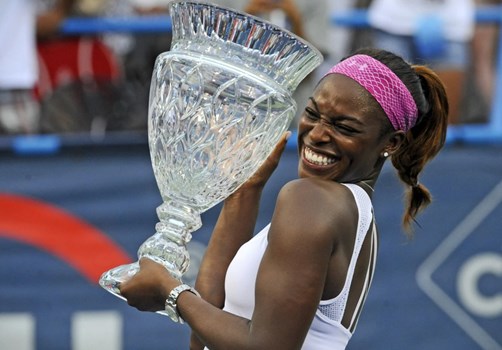 earned two championship points with a service winner in Sunday’s Citi Open women’s singles final, but she knew better than to think her first WTA title would come easily.

The 22-year-old first gained fame by beating Serena Williams in the 2013 Australian Open and topping out at No. 11 in the world rankings during that year. But during the past two seasons, she has fallen back into the 30s while earning the unwanted designation of being the highest-ranked player without a WTA final appearance. She was 0-6 in semifinal matches entering this week’s tournament.

So Stephens was prepared when she faced yet another setback, albeit a minor one, in the form of a return winner from Anastasia Pavlyuchenkova that brought the score of the final game to 40-30. Stephens responded by winning the next point to seal the 6-1, 6-2 victory in 1 hour 3 minutes.

On Saturday night, Stephens said she did not have a plan for how she might celebrate a championship victory. Sunday, she held her hands up and paused for a moment before flinging them downward in a full-body bow at the end of the match. Then came a polite thank you to the umpire and a wave to the crowd.

“I’ve had a lot of ups and downs,” Stephens said. “Nothing was rushed. Nothing was given to me. I had to work for everything, and it was just nice that all the hard work and everything that I put into it, now I can say that I have a tournament title.”

In the first game of the match, Pavlyuchenkova earned four break points, but Stephens saved every one. The American did not allow her opponent to get another break point in the first set, speeding to a 6-1 set victory in 27 minutes thanks to 12 winners and two breaks of her own.

Stephens grabbed an early break in the second set, chasing down a drop shot and tapping it over the net to earn a 2-1 lead.

Pavlyuchenkova then got her shoulder evaluated while Stephens swung on air to stay loose. When action resumed, Pavlyuchenkova broke back, but Stephens regained control a game later, taking a 3-2 games lead on one of her 12 forehand winners in the match.