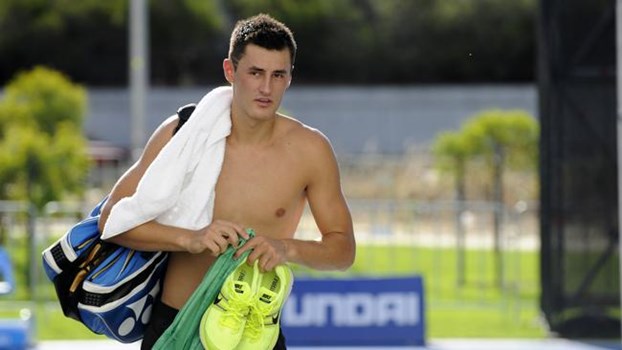 It was game, set, match for Australian tennis player Bernard Tomic after he was led away in handcuffs from a swanky South Beach hotel because he reportedly refused to turn down his loud music.

When other guests complained about the loud party and music coming from the #15 penthouse at the W South Beach on Collins Avenue around 5 a.m. Thursday, two security guards went to Tomic’s room to ask him to turn it down.

Tomic, 22, refused and shut the door in their faces, according to his arrest report.

The guards tried twice more to get him to turn down the music to no avail. On their third attempted, Tomic allegedly “pointed his finger aggressively” at the security guards and slammed the door in their faces. They then decided to evict him from the room and called the police.

The guards, accompanied by two Miami Beach police officers, went back to Tomic’s room and informed Tomic and his friends that they had to gather up their belongings and leave or else face arrest for trespassing.

Tomic’s guests left but he stood his ground and refused to leave, according to the report.

Tomic was again told leave and, again, he refused. The officers then arrested Tomic and charged him resisting arrest and trespassing.

“It’s sad, you know, he was probably just trying to have a good time but the fact that he talked back to the cops, I mean, you know, you have to show some respect,” said W South Beach guest Brittany Mason. “Sometimes when people have success at a young age it can kind of go to their head a little bit, hopefully he learned a valuable lesson early on.

“When you are in the public eye you are definitely a role model for a lot of people. He’s probably just having a bad night,” said W South Beach guest Bernard Canis.

In fact, it’s been a rough couple of weeks for the tennis star.

Tomis lost in Rhode Island at the Hall of Fame Tennis Championship. He was also dumped from the Australian Davis Cup team after a 10-minute tirade directed at Tennis Australia officials following his exit from Wimbledon. He lost his first-round encounter against fellow Australian John-Patrick Smith in straight sets 6-3, 7-5.

On July 13th, Tomic was ranked world No. 25 by the Association of Tennis Professionals.