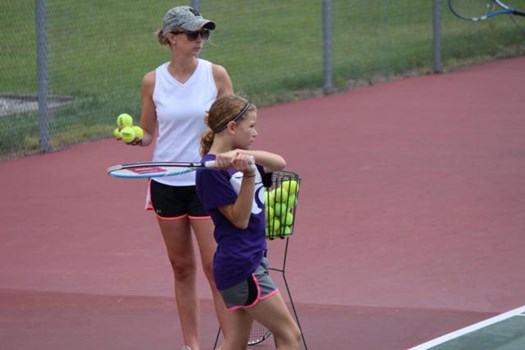 Students of Edwardsville School District 7 were welcomed to participate in the Tiger Tennis Camps for Beginners and Intermediates at Edwardsville High School throughout the summer of 2015.

The camps, which have been offered by the district since 1995, were designed for beginner and intermediate athletes who share a love for tennis. The athletes were organized by age and level of experience. Mondays of the camp were primarily dedicated to serving and receiving. On Wednesdays, the young athletes put their skills to the test by playing in on-court games.

The day began with the Tigers One Tennis Camp, which allowed kids entering 3rdthrough 5th grade to refine or relearn some skills that may have been lost during the long break. The first session began at 8:30 a.m. and lasted until 10:00 a.m.

A camp for kindergarden through 2ndgraders allowed the young ones to become aware of the sport in all of its glory, learning simple techniques like serving, receiving, and maneuvering around the tennis court. This session of camp lasted from 10:15 a.m. until 11:15 a.m..

The Tigers Two Tennis Camp let students entering the 6th through 12th grade to come and improve on their existing athleticism, and prepare for this upcoming tennis season. The more experienced athletes were encouraged to participate in Inter-Club matches with other local camps as well as at the Tiger Tennis Classic, which occurred on June 26 at EHS.

Tiger Tennis Camp has been occurring each Monday and Wednesday every week since June 15, and will continue until July 22.