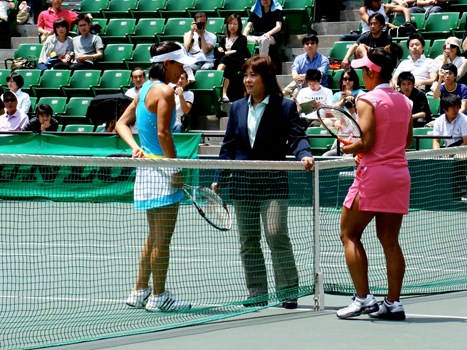 After his Wimbledon quarterfinal loss to Andy Murray, Vasek Pospisil brought a return to Rafael Nadal’s criticism of chair umpires when he accused the umpire of wrongly penalizing him for time delays. Though Pospisil claims he was biased against for being a lower-ranked player, even the higher-ranked players have taken issue with the judging of matches. Earlier this year, Nadal had requested that a certain umpire, Carlos Bernardes, not oversee any of his matches, citing a similar problem with being repeatedly called for time delays. While it may seem that umpires and line judges are the ones at fault for controversial calls, there are some things we need to keep our eyes on before we place the blame for good.

Despite the number of judges on the court during play, they never catch every little thing that happens. Many times, they focus on one thing to watch for along the line, be it balls hitting close or players’ feet when they serve, or they may focus on the players’ behavior, how long they take between playing points or what they do during breaks. Depending on what they’re looking at, they could call fault several times or hardly at all. They may also call some things more than others, such as time violations over feet crossing the line. These called faults will change from match to match, depending on the judges and what the players do, as some may unknowingly step onto the white when serving or take their time before serving. This inconsistency can cause headaches for players, as it has for Pospisil and Nadal, as well as Serena Williams and former world No.1 John McEnroe.

During her U.S. Open semifinal against Kim Clijsters in 2009, Williams, who was on second serve, got called for a foot fault, giving Clijsters match point. Instead of letting it go and continuing play, Williams began to cuss out the line judge and threaten her with the tennis ball. When the umpire talked to the judge and Williams about the delay, Williams denied threatening the judge but the umpire penalized her for a point, which sent Clijsters to the final, which she ended up winning. Here, it would seem Williams and not the judge was clearly out of line, unlike the cases with Pospisil and Nadal. However, the ultimate result remains the same for all: what the judges and umpires say, sticks, no matter how controversial or seemingly biased. Yet even the less controversial calls, such as whether a ball hit the line or not, make some think that no judges at all would be a fairer game.

Most notably and perhaps most persistently in this voice has been commentator John McEnroe. It seems one can’t watch a single match without him bringing up the computer sensors on court. Every time a player wins a challenge on a line shot, he then argues that the sensors and automatic replay should completely replace the line judges. What McEnroe is missing, however, is when the judges’ call stands, despite a player’s challenge. Also, though the technology has certainly come a long way, it is used much less on grass and clay courts, since the ground is not as solid and could cause the sensors to replay a false reading. That’s not to say the technology hasn’t improved the game, since it does allow players to challenge and sometimes reverse a call and point. But the amount of wrong calls by judges is small compared to the number of correct calls, which shouldn’t give McEnroe’s argument very much footing.

However, many people would rather side with their favorite players than watch tennis as it should be played. Granted, the inconsistency of judges’ calls can sometimes be a headache, for both players and fans alike. Yet they play an integral part in making sure the rules are followed; Chris Chase from USA Today argues in his article, “Why is Rafael Nadal allowed to blackball an umpire?”, that even greater enforcement of the rules is needed, especially in the area of fines for players’ misconduct. We shouldn’t get upset when players are penalized for changing their shorts in between points or cussing out line judges. Perhaps if we all focused on how the match is played and judged, instead of who is playing it and how they are judged, all of tennis would improve as a sport.